Did you the species of parrot in this week’s Pet Pop Quiz? Did you ever have one? I did. His name was  Turkey and he was the first bird I owned. While he never talked he was a character and a great ambassador of the species. One of my mom’s friends who was terrified of birds adopted one of Turkey’s babies for her 2 kids and fell absolutely in love.  Love when that happens! 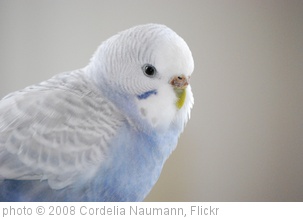 Q: This little bird is one of the smallest parrot species and the most popular. But what it lacks in size it makes up for in talking ability as it’s known as one of the best talking parrot species. What is the name of parrot?

A: Most people in the US know this species as the parrakeet, but it’s also known as the budgerigar or budgie for short. One budgie made it into the Guinness Book of World Records for being able to speak 1728 words.

If you left a correct guess in the comments you’ll get you an entry into the September Pet Pop Quiz and Contest. Stop by next week for another chance to get an entry.