The great thing about writing a pet blog is I get to write about something I absolutely love and have loved my whole life- pets. I’ve been lucky to have worked different jobs that let share my love and knowledge with other pet owners- owner operator of a grooming shop, a veterinary assistant, a volunteer dog trainer for a local obedience club and a customer service representative for an online pet supply company. Pets are definitely my life.

A lot of pets have shared my life. Not just my own, but those I’ve met through my work. I’ll introduce you to a few that have helped shape me into the pet owner I am today and inspire my blog.

Whitney was my first dog.  The dog I wished for. The dog I walked to the library every week or two so I could read anything and everything dog-related.  The dog I trekked over town for so I could get the newest dog magazine.  The dog who showed me how much fun training is and the bond it builds. We made it through parvo, separation anxiety and her fear of men. My proudest moment was showing her at a fun match and having her pass the stand for exam with a male judge. She showed how far trust can take you. She was the best first dog a person could ask for not just for what she gave, but what she allowed me to learn.

I did not need another cat.  I didn’t need a sick cat. But I sure knew I could not let a 5 year old cat be put to sleep.  Woody’s owner didn’t know cats could get diabetes and didn’t have the resources to care for one that did. Adopting this diabetic cat taught me that many people aren’t aware of the potential problems their pets could develop.  I learned where to find reliable information online to help me with that duty.  I learned (again, but this time I listened) what a difference a diet can make for a cat and my 2 current adopted diabetic cats are diet controlled, 1 after being on insulin for over 5 years.  I learned about a wonderful group, Diabetic Cats In Need, that helps owners learn about the disease and keep their cats.  If someone isn’t able to, they work to find a home for the diabetic kitty, no condemnation, just a goal to do the best for the cat. I learned their are many groups out there doing the same for other special needs pets.

I knew about ferrets. I’d met ferrets.  But I never really planned on owning any until I started working at  a company called The FerretStore, an online pet supply company.  After talking to people all day about their little fuzzbutts, I decided to add 2 to my family.  When I began researching their care, I was surprised at how many ferrets were surrendered to shelters and rescues.  I had never thought about how many ferrets or guinea pigs or rabbits were given up, just the dogs and cats. Adopting Sugar and Spice opened my eyes to these small pets being surrendered and the need to educate people on their care before they add them to their household.

Who inspires your blog?

When I adopted my first dog, I wanted to name her Ham.  Not because I’m a big pork fan, but because I felt animals took after their names.  I thought a dog named Ham would end up being a big clown.  But my mother decided she was not going to yell “Ham come” out the back door, so I settled for Whitney, after Whitney Houston.  Fortunately, she didn’t take after her namesake and was the best first dog a person could have.

I love deciding what to name my pets.  Sometimes I come up with a name right away other times it takes a few days to decide just the right one.  I like names so much I even keep a list of potential ones to use.  You never know when one might fit or a friend is looking for suggestions.

Names can tell a lot about the pet and their people.  Often there’s a  story behind  why a name was chosen.  Here are some of the stories behind how some of my zoo crew got their names.

His original name was Toby, but a friend’s dog had that same name and it didn’t seem like a good fit. I like to rename my adopted pets giving them a new start with a new life and a name that has no negative connotations. I had chosen the name Chaos off my name list, but when I picked him up after he was neutered at the shelter, it didn’t seem right. There was a country music band named Ricochet and that seemed like a perfect name for an on-the-go Jack Russell.

I had no intention of adopting another cat when the head vet tech came back in the the treatment area with a 4 week old kitten someone had found and brought to the Emergency Vet Hospital I worked at. She held her out and showed us the cutest kitten.  I knew I was in trouble when the name Charm popped into my head, but I didn’t need another cat. I spent the rest of my shift hoping the other tech would take her home, but that didn’t happen.  She ended up coming home with me after all with her new name.

I found him on Petfinder.  His post was pretty much like all the other ferrets until I got to the end where they had added “he might have something wrong with his legs”.  That didn’t seem right so I went to the shelter the next day to check him out and ended up adopting him.  I’m not sure what they thought might be wrong with his legs, I couldn’t find anything wrong and he moved like a normal ferret walking around the getting acquainted room at the shelter. As I was watching him in the room, I decided to name him Amblin since he seemed to be having fun ambling around.

Eco’s name was easy. He joined my household on Earthday and he was green(part green anyway) so something to do with the environment seemed right.

Yes, I’m a kind of a Gleek.  In the pilot episode they show a sign that said “By its very definition, Glee is about opening yourself up to joy.”  I loved that quote and felt it was a perfect description of what it felt like when pets shared your life. When I adopted a bunny a few months after seeing the quote, it just seemed right to name her Glee, especially after watching her do bunny binkies.

What’s the story behind your pet’s name?

January is National Train Your Dog Month so Pamela at Something Wagging This Way Comes put together a Train Your Dog Challenge. I decided I would join in with my bird, Eco. Yes, you heard right, my bird.  Pamela opened up the challenge to any species so I figured it was time to finally work on teaching Eco the trick I’ve been wanting to work on- putting a coin in a piggy bank.

Why my bird and not one of my training loving dogs? The goal of the challenge is benefit our relationship.  I know my relationship with my dogs is good. And it’s actually good with Eco, but with him it’s always a work in progress.

I got Eco almost 2 years ago. I had been wanting to add another bird to my flock so had been looking around for one that I knew was meant for me.  So what made Eco special?  He bit.  Yes, he was a biter.  Isn’t that a quality everyone looks for in a companion?

The woman who was handfeeding him was looking for a special home for him because at the young age of 4 months he was pretty vicious with his beak.  I love learning behavior problems and how to work with them, so I jumped at the chance to take Eco.  Once he arrived, he didn’t disappoint.  While he would let you handle him, he was quick to bite and hang on.

Between training and learning what some of his triggers are (he’s not an early morning bird), plus a little singing when I want to put him to sleep at night, biting rarely happens.  I don’t do as much clicker training as I would like but do try to do it occasionally to keep the bond going.

I’ll be posting updates (and maybe some video if I can get over my hatred of being filmed) as we work the challenge, so be sure to check back! 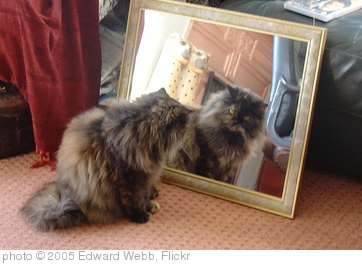 With the economy, the national disasters and major news happening this year, I feel very lucky that 2011 was a good year for me.

I’m looking forward to 2012-blogging more, being more active on Facebook and Twitter. And the biggest thing- 2012 is going to be the year I start a pet food pantry in my area.  It’s something I’ve been wanting to do, I’ve held off because I’ve been trying to get together the funds to apply the state before I officially do anything, but this year it’s going to happen (making it true by saying it). Being able to make a difference for pets online has really pushed me to wanting to make a difference for pets in my community.

This post is part of the New Year, New Followers Hop

I really hadn’t planned to adopt so soon after adopting Minuit this summer, but I couldn’t resist this one.  I adopted Min from Diabetic Cats in Need, a great group that helps diabetic cats, and so I follow them on Facebook.  This past weekend they posted a 10 year old diabetic Ragdoll in need of a new home after his mom died. I  fell in love with Ragdolls after adopting my diabetic Ragdoll, Woody, from the vet clinic I worked at.  Before I adopted Min I knew I was either going to adopt a Ragdoll or a diabetic cat.  Adopting a diabetic cat ended up being the one when Min came although I did pass up a couple of Ragdolls because they just didn’t feel right.
I really did wait for someone else to step up and offer to adopt Poughkeepsie from DCIN.  After 2 days with no interest, I emailed. Needless to say Poughkeepsie should be arriving on Sunday.  We will have some work to do getting him regulated.  Of course, my ultimate dream would be for him to end up being diet controlled like Min, but I have to be honest and know it might not happen with Pough just like it didn’t happen with Woody.
I’m started to get excited as we get all the details work out to get Pough here and i can’t wait to introduce him to you.  Until he gets here you can see him on the DCIN website.